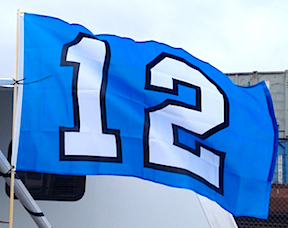 Imagine this:  every morning at the bus stop, you’re so excited about going into work that you jump up and down and hug strangers.  So excited that you wouldn’t open the office door without your company T-shirt on.  You want everyone to know you’re a member of this team.

Wait.  What is that reminding me of?

Oh, yeah. The mass craze around our Super Bowl-winning Seahawks.  And truly, a “craze” it is (root of the word “crazy,” right?).

My wife and I hardly ever watch football.  But this year, as the Hawks kept winning, we got The Craze.  You couldn’t have torn us away from the TV on Sunday afternoons.  And yes, we literally jumped up and down.  Late middle-aged people that we are.

What is going on here?  And more importantly, how do you take that into your workplace team?  Sounds absurd, maybe—employees screaming and chest-bumping their colleagues.

But that behavior is at the end of a spectrum, and I believe it’s not only possible, but required of a leader, to move your employees along that spectrum, from one end (“Going Through The Motions”) to the other (“I’ve Won The Lottery”).

The question, of course, is “How?” And then you have to look at what is it about sports that creates that unbridled enthusiasm.

Of course there’s the notion of victory.  I’ve admitted we didn’t even watch until they started winning.  In sports, there almost has to be a winner and a loser.  But is that the only way to generate excitement?  By vanquishing someone?

I don’t think so.  I believe pure fun and excitement can be generated regularly in the workplace without having to have a loser.

That thought led us, on our recent podcast, to musical performances we’ve been involved in.  As a performer, you can get close to that sports-team-victory high — without anyone being a loser (well, except the oboe section, but that’s another story).

So, then, what is it about musical performance that generates that high?  As in sports, the “team” looms large.  Individual pursuits can elicit passion and fulfillment, but seldom the excitement that characterizes belonging to a team.

And as in sports, there’s a common purpose in music – a deeply shared vision toward a singular goal.  And it has to be a “stretch” goal, otherwise why bother?  When all of us are focused on the same distant target, eagerness happens.

I don’t expect your employees to start spontaneously chanting, “Go … Acme!  Go … Acme!  Go … Acme!”  But the best companies – as well as, studies show, many of the most profitable companies – are places where, through a commitment to excellence, team, and shared purpose, people are genuinely excited (if a bit less excited than Seahwawks fans) about coming to work.

One Response to Super Bowl Fandom and Your Workplace