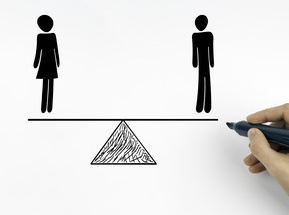 Talking gender in the workplace can be a “third rail.” Do men have anything to contribute to women who want to maximize their workplace potential (even though they can’t walk in their moccasins)?  Jim & Steve chime in on the recent Google blow-up about sexism there and in the industry and ask, How do you know if you’re sexist?

I loved this show. I am so happy to hear “older white guys” talking about this because we need your cohort to be part of the conversation. And this needs to be a conversation not a pundit fest. That said, there were a few places where you tripped. The premise at the end of the show that business is male dominated and that the enterprise model responds to a more “aggressive male model”. This doesn’t ring true. A lot of companies that are individualistic and prize a stack ranking competitive model tend not to innovate or be strong in places where collaboration is needed.
As to the issue of speaking up or interrupting in meetings…I take the Captain Picard method. Everyone gets a turn to present their ideas fully and then comments are taken. Saying that women need to stop waiting for recognition in a meeting or to shut down someone else while they are speaking is rude regardless of where it happens. Women are also called bossy, difficult, or the b word when we do show initiative. We are also socialized to be more accommodating from childhood. A bossy boy is referred to as a leader. There is another dynamic playing out here as well, and that is one of safety. When the statistics state that 1 in 5 women have been assaulted on college campuses we now have a traumatized population in the workplace. So there are social ills we have to address as well as workplace dynamics. As much as we may like to divorce the private individual from the employee, it always fails. I would be willing as a women to brave the studio space where I would be outnumbered to further discuss this. An excellent documentary “The Mask You Live In” that addresses how boys are socialized illustrates that we are all hurt by hyper-masculinization. This falls along gender, racial and economic lines.

Interesting show. I will say that women can be assertive (or coached to be more assertive) but may then face negative feedback of being too “stubborn”, “argumentative”, “abrasive”, or being a “b**ch–men won’t typically get that feedback for the same behavior. So, not only should women be encouraged to be assertive, but men need to guard against sending a contradictory message about that very behavior.